Who is Maude Kerns? 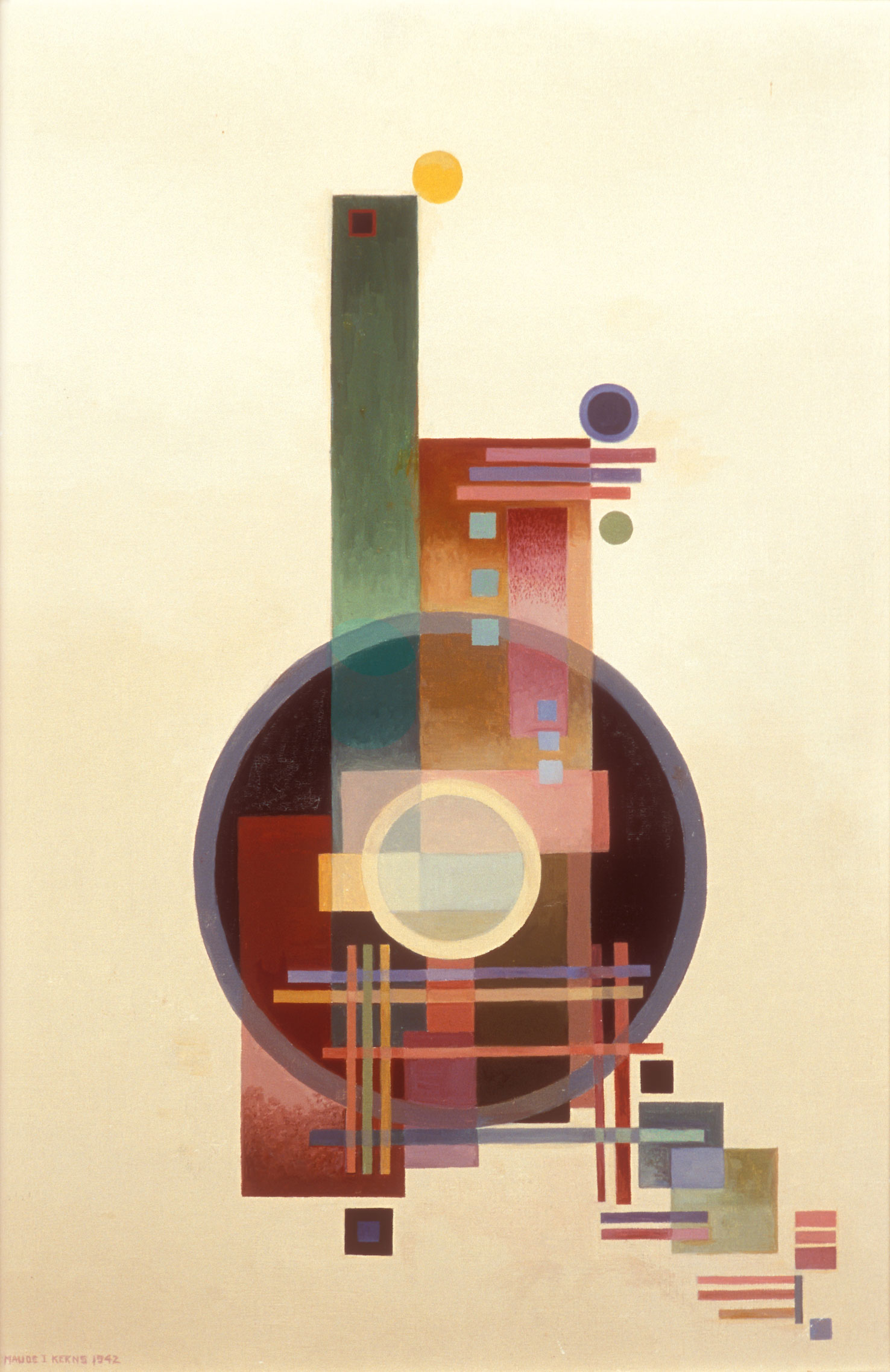 Ascension, oil on canvas, 1942
Collection of the Seattle Art Museum

Maude Irvine Kerns, the namesake of the Maude Kerns Art Center, was a visionary artist and educator, the first head of the Art Education Department at the University of Oregon (1921 – 1947), and an internationally recognized artist in the Non-Objective Art Movement. Born during the Victorian era, she fearlessly pursued an artistic vision that allied her with some of the most acclaimed modernist artists of her day. Her work is in the permanent collections of the Guggenheim Museum, the Portland Art Museum, the Jordan Schnitzer Museum of Art, and the Seattle Art Museum, among others, and is owned by the Microsoft Corporation and many private collectors. The Maude Kerns Art Center has a collection of over 75 pieces of her work comprised of watercolors, prints, brush paintings, and oil canvases.

Kerns was born on August 1, 1876, in Portland, Oregon. She graduated from the University of Oregon in 1899, attended the Mark Hopkins Institute of Art in San Francisco in 1900 - 1901, and then studied at Columbia Teachers College in New York, where she graduated in 1906 with a B.A. in Fine Arts and a B.S. in Art Education. At Columbia Teachers College, Kerns studied with artist Arthur Wesley Dow, who, along with Asian art scholar Ernest R. Fenollosa, developed a formal theory of composition based on the idea that all art was defined primarily by spacial arrangement rather than by the imitation of nature.

During her long career, Kerns experimented with a variety of styles, which included realistic landscapes and portraits, brush painting, and non-objective explorations of color and form. She studied with some of the most well-known modernist artists, among them Hans Hofmann, Rolph Scarlett, and Alexander Archipenko. She travelled extensively in Europe and Asia, and worked with Gertrude Bass Warner, the founder of the University of Oregon Museum of Art (now the Jordan Schnitzer Museum of Art), to select pieces for that museum’s permanent collection of Asian art.

It was in the 1940s that Kerns’s search for an expressive visual form for her spiritual ideals culminated in non-objective paintings composed of interlocking triangles, circles, and rectangles. Kerns is most recognized for her non-objective paintings. The term "non-objective art" describes any type of abstract art which is devoid of reference to the natural world. Kerns was the only woman in the Pacific Northwest to be active in the Non-Objective Art Movement. She was in close contact with a number of avant-garde painters in New York, including the Baroness Hilla Rebay, the first director of the Museum of Non-Objective Painting (now the Guggenheim Museum). She showed regularly at the Museum of Non-Objective Art from 1941 – 1951 alongside such artists as Moholy-Nagy, Ilya Bolotowsky, Alice Trumbell-Mason, and Josef Albers.

Kerns shared with Rebay the aspiration to find a visual exploration of a spiritual state. “Non-objective painting represents no object or subject known to us on earth,” Rebay said. The masterpieces of non-objective art are “the culmination of spiritual power made intuitively visible. The forms and colors we see are secondary to their spiritual rhythm which we feel.”

Maude I. Kerns
A Chronology