VOLUNTEER as a Tour Guide!

This event is part of Lane Arts Council’s Fiesta Cultural. Visit lanearts.org/fiesta-cultural for a full listing of events. 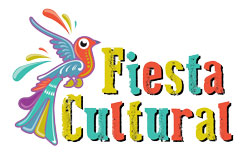 The Mexican Day of the Dead celebration blends the ancient harvest rituals of the Aztec god of death and the Roman Catholic holidays of All Souls and All Saints days. On November 1 and 2, the dead are thought to return to partake in the activities of the living. Holiday activities include the creation of altars that welcome deceased loved ones.

Eugene artist Aunia Kahn, whose work combines photography, digital painting, and collage, displays three pieces in the 2019 Día de los Muertos Exhibit, including two digital paintings and a linocut. Kahn is a past participant in the Art Center’s Día de los Muertos Exhibit and has shown her work in venues throughout the US as well as internationally. Her powerful painting “La Muerte”in the 2019 exhibit depicts an eerie masked woman in red wearing a giant sombrero covered with lit candles.

Beaverton, Oregon artist Jocelyn Moreno exhibits two striking pieces in watercolor and colored pencil that explore aspects of Moreno’s Mexican heritage. She focuses on two arenas that have long been dominated by men, but that are now accepting women, the Mariachi music industry and Charreria (Mexican rodeo). “Escaramuza” shows a dramatic frontal view of a skeleton of a female horseback rider in traditional dress competing in the Charreria. “La Mariachi” is a colorful depiction of a skeletal woman mariachi musician.

Mexican photographer Fernando Angel Soto Vidal shows eight of his pieces in this year’s exhibit, most of which highlight the special Día de los Muertos tradition of hanging altars in Coatetelco in Morelos, Mexico. A prize-winning photojournalist, Fernando has shown his work in 100 group exhibitions and has had more than 30 solo shows in both Mexico and abroad. He speaks about “Day of the Dead: Expressions of Popular Culture in Morelos, Mexico, especially in Coatetelco” at the Art Center on Thursday, October 31, from 12:00 – 1:00 pm.

A Day of the Dead Gift Shop presented by Suzanne Algara of Buganvilla Imports features authentic crafts created by Mexican artists, including Catrina figures, Day of the Dead dogs, nichos (decorative religious altars), milagros (charms), an array of skulls, and more. Algara, who was born in Mexico, returns to her native country each year and works with artists from a number of different Central Mexican states.